In OpenStreetMap, each feature is described as one or more geometries (think for instance of a river’s shape) with attached attribute data (think of the river’s name). Geometries are described with three different elements: nodes, ways and relations. Attributes are described as tags that can be part of a node, a way or a relation.

Nodes are the equivalent of a point, ways are like lines that connect points and relations are collections of points or ways that represent a larger whole. This is easiest to understand with a couple of examples.

Nodes are used to represent any kind of point type feature or just to designate a name for a point of interest in the vicinity. Here’s a node representing a café: 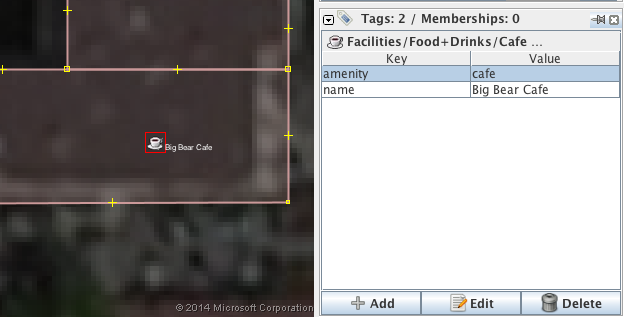 A way is a line feature connecting two or more nodes - like a road here:

If you close a way - by connecting its end to its start, you can map area type features like this building here: 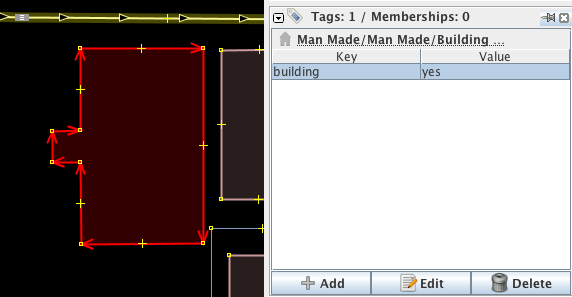 Nodes are usually just the items that define a way. But nodes sitting on a way can have their own significance. In this example the node is part of 10th Street and M Street and it also denotes that there’s a traffic light.

Before we hop to the third element next to nodes and ways - relations, let’s look at tags. You’ve seen them now already a couple of times in the examples above, like in this café node: 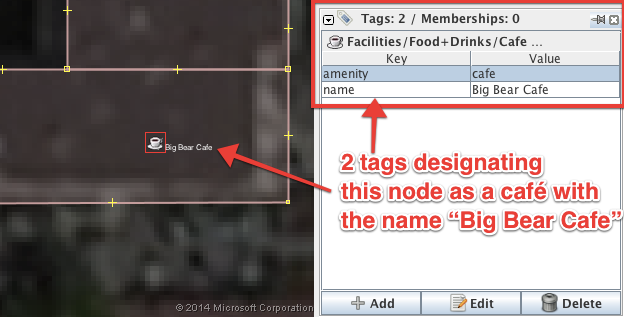 Tags can be on any element: on nodes, ways and relations.

Relations are used to organize multiple nodes or ways into a larger whole. Take here for instance the bus route 23 running through 3 different ways.

The type of relation that you’ll probably deal most with describes an area with punched out holes - a so called multipolygon. Here is an example of a multipolygon building with a yard. It consists of 2 ways with each multiple nodes. One way describes the outer wall of the building, the other one the inner wall. The ways are part of a relation of the type type=multipolygon, the outer way has the role outer and the inner way has the role inner. Note: the building=yes tag is on the relation (not on the way).

Your OpenStreetMap editor will take care of creating multipolygons for you so don’t worry if this seems dense for now. If you need to fix a multipolygon, this is a good section to come back and review.

To learn more about the OpenStreetMap data structure, take a look at these resources:

This is the last guide in this category.
back to Mapping with OpenStreetMap
Next: The OpenStreetMap data model
Terms + Privacy © Mapbox