This is a walkthrough of how to create and edit the most common features on OpenStreetMap. It’s an introduction to get you started mapping but not meant to be comprehensive. We’re going to use some OpenStreetMap specific terms here, if you’re not familiar with what “nodes”, “way” and “relations” are, read the previous guides first.

We’re focusing in this section on the most common map features. For full documentation, refer to the OpenStreetMap Map Features guide or Feature categories. To look up a specific map feature fast, for instance how to map a bus stop, google with a query like “tag bus stop site:wiki.openstreetmap.org”:

A valuable complimentary resource is taginfo.openstreetmap.org. Tag info shows you the number of times a specific tag has been used, which lets you find out how established a tag is.

Roads are some of the most significant features we map. While roads are easy to trace off of Satellite imagery there is a large vocabulary for classifying different types of roads.

Tracing a road is simple. Use the Draw (A) tool in JOSM or the Line tool in iD and draw the road following its course. The trick is to use the right amount of nodes to describe a way. Too few make the road appear very jagged. Too many are unnecessary data and make the road hard to edit later.

Roads must be connected where they intersect. On the left you can see two roads just crossing each other, on the right note how a node connects the two roads. This is important for navigation, where vehicles must be guided from one road to the other.

And follow the flow of roads where possible. On the left, the road was traced with a “detour” for no apparent reason. On the right you see how the road tracing follows the logical flow of the road. 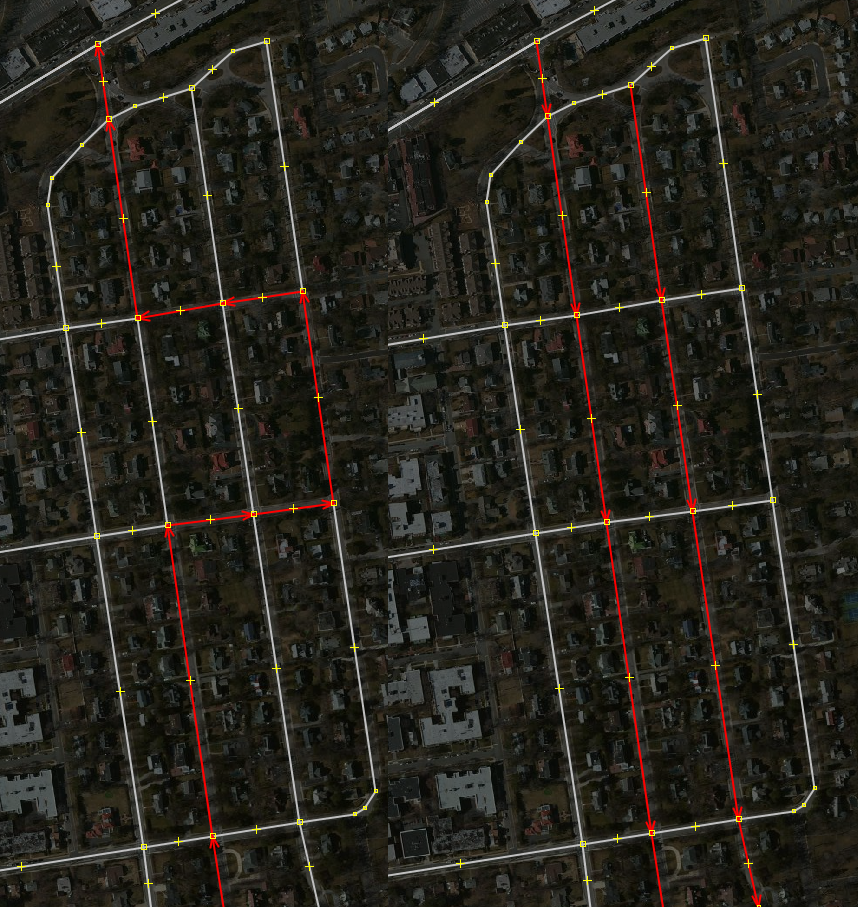 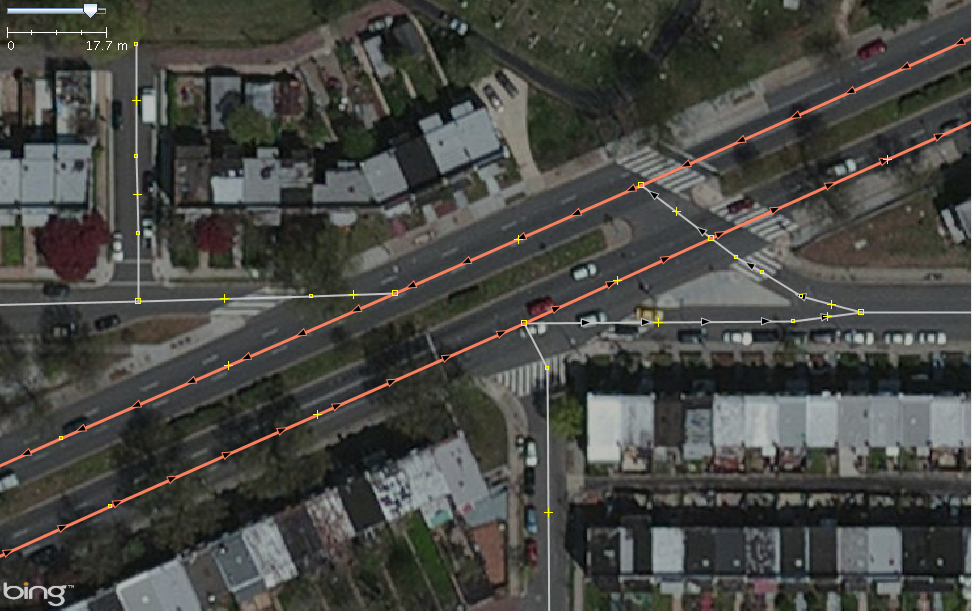 When mapping a dual carriage way, make sure that connecting roads are properly connecting to both carriages if this connection is possible in reality: 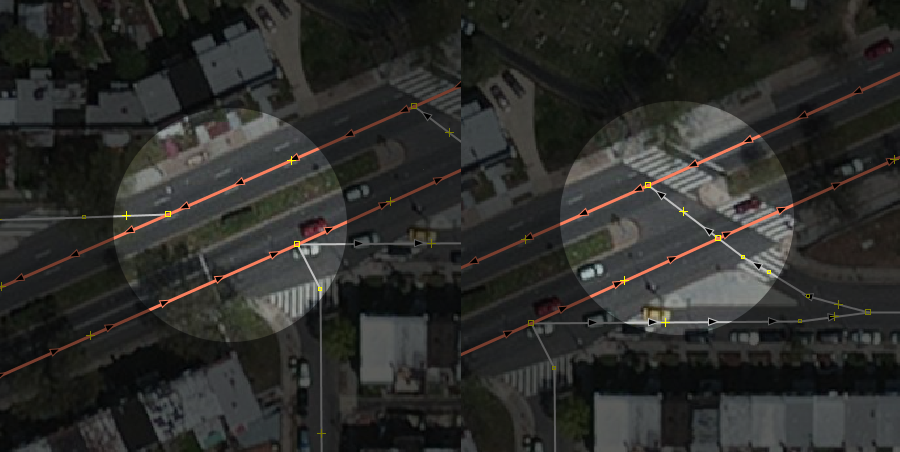 No matter whether it’s an overland road, a city street, a foot path or a cycleway, you’ll find it tagged with the highway key. Here are some examples of common tags:

Oneways are mapped by simply adding a oneway=yes tag to the road’s way. Keep in mind that ways have a directionality. So the road will be a oneway in the direction of the way. If you need to change the flow of the one way, you have two options: 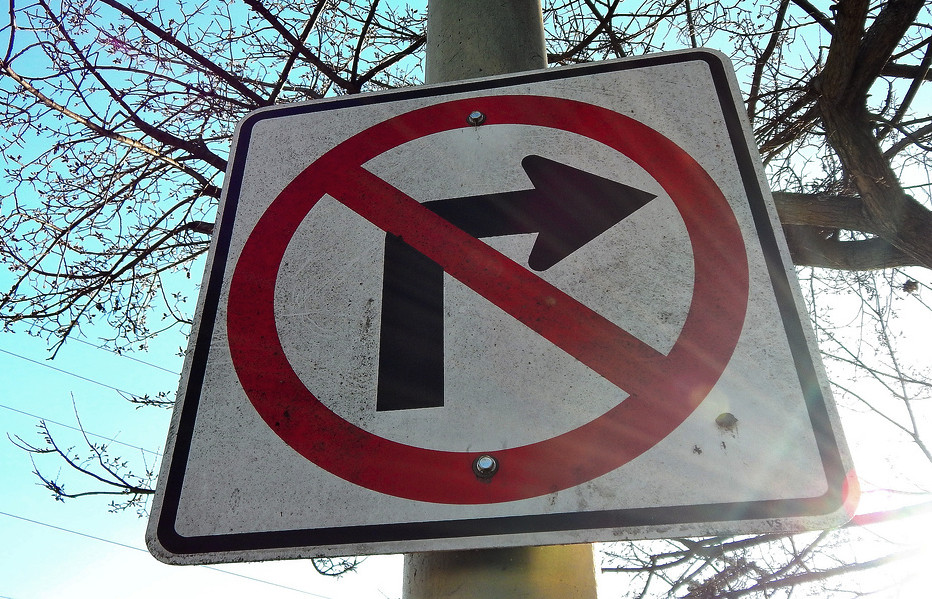 Turn restrictions can get more complex quickly, so before you create or edit turn restrictions, make sure you read through and understand all available documentation on the OpenStreetMap wiki.

Video: How to edit turn restrictions in JOSM

One of the more subtle skills to learn in OpenStreetMap is how to properly classify roads. The highway tag has more than eight values for roads, another five-plus for non-vehicular traffic, and a series of secondary tags. What’s more, highway classifications are highly country specific and follow different conventions on a country by country basis.

Here’s a quick guide on how to go about working with road classifications in OpenStreetMap.

For a full reference on highway mapping, look at the wiki entry for the highway tag.

The intersection between a road and another feature must always be defined. Where they meet, there is either an intersection, a tunnel or a bridge.

To create a simple intersection between two roads, just make sure to connect the two roads with a node.

A tunnel carries the tunnel=yes and a layer= tag that is one lower than the layer= tag of the feature it intersects with (default layer value is 0). The road is not connected with the other feature. Split ways where the tunnel starts

In addition to the road’s highway=* tag, a bridge carries the bridge=yes and a layer= tag that is one higher than the layer= tag of the feature it intersects with (default layer value is 0).

Map a railroad crossing similar to an intersection between two roads by connecting the road and the railroad with a node. Then tag the node with railway=level_crossing. Do not confuse this tag with railway=crossing which is only for pedestrian crossings.

In a complex intersection involving multiple carriage ways trace the roads so that they reflect the flow along the main carriages and make sure that oneways make sense. 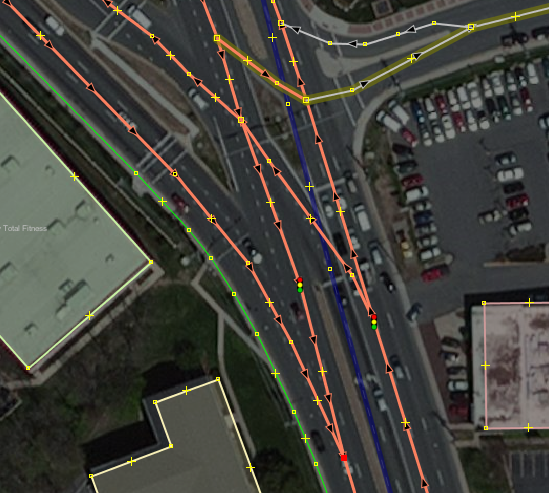 Tracing buildings takes good imagery and patience. Take your time and pay attention to angularity, alignment between buildings and reflecting the regularities between buildings. Buildings are traced as outlines of where the building meets the ground. This last piece is important. The roof outline is often easier to see in the imagery so you’ll find it often traced in OpenStreetMap but it’s wrong and needs to be shifted to the ground outline.

The main challenge with tracing buildings is lack of detail in imagery. Where you don’t find good enough imagery for tracing a building, just don’t trace it.

Here are a couple of JOSM specific tips to trace buildings effectively.

For tracing buildings, use the buildings plugin. Once enabled, a new building tool will be available in the edit toolbar on the left. The building tool B will draw rectangular shapes tagged building=yes for you. To draw buildings parallel to each other, draw the first building, select it, then draw subsequent buildings.

If you draw closed ways free hand, use Tools > Orthogonalize Shape or press Q to square out buildings like so:

Use auxiliary lines to align protruding portions of a building:

To align previously traced buildings neatly, select them, and then select two reference nodes to create an alignment axis and orthoganalize Q the selection.

Here is a quick end to end walkthrough of how to trace a building:

“Point of interest” is a general term for a real world point-like feature noteworthy enough to include it on a map. Some examples are restaurants, cafés, shops, banks, churches, public toilets and water fountains. There’s not a single point of interest tag key in OpenStreetMap but a variety that can be used for mapping a point of interest: amenity=, shop=, tourism= are some examples.

The simplest way to map a point of interest is to create a single node and add corresponding tags. Here’s an example of a fountain mapped in OpenStreetMap:

Here’s an example of a restaurant:

Areas as points of interest

Wherever you can clearly determine the extent of a “point” of interest, map it. A good example are parks, here is Folger Park in Washington DC. The Park is mapped as a closed way tagged leisure=park. Note how the way follows the exact outline of the park.

Building as point of interest

Sometimes the building itself is considered the point of interest. Think for instance of a MacDonalds restaurant in an urban multi-use building versus a MacDonalds drive through in a suburban strip mall. Or - often easy to spot from satellite imagery - think of a place of worship like a church. In such cases the building itself should be tagged as a point of interest. Here’s a church that has first been mapped as a single node in a building. The example shows how all tags from the node are transferred to the building and then the node is removed.

An example where a school does not occupy the entire building:

An example where a school does occupy an entire building:

An example where a school occupies its own school grounds:

Trace small streams as just a way tagged with waterway=stream. The way’s direction signals the direction in which the water flows. For larger rivers, trace the center of the river as waterway=river and in addition the river banks with natural=water and water=river tags. The name of the river always sits on the waterway. See here for an example:

Islands in rivers are mapped as relations of type=multipolygon. Observe how on a multipolygon the natural=water and water=river tags sit on the multipolygon relation and not on the way:

This is the last guide in this category.
back to Mapping with OpenStreetMap
Next: Mapping common features
Terms + Privacy © Mapbox