Detailed guide mapping features for navigation on the OpenStreetMap project. Before you start, please read the guide on Mapping with OpenStreetMap

These are features that help the routing engine find the safest and fastest route between two points.

The value of the key helps show the importance of the highway within the road network as a whole. The importance ranges from the most important motorway to the least important service. The routing engine takes into account this importance of classification when determining optimum routes.

Road classification may varies from country to country. The country specific use cases can be found in detail on separate wiki pages. For example, when mapping roads in India, the local community refer to the India road tagging wiki.

For an example of an area with a good concentration of different classes of roads on OpenStreetMap, look at San Francisco area. This osm query can be used to extract and gather numbers of all the highways present in a given bounding box on OpenStreetMap.

Department of Transportation websites and wikipedia are some of the primary sources for highway information.

Oneways generally refer to road segments which allow traffic in only one direction. There are also streets which have oneway characteristics for only on certain times of the day to regulate traffic.

San Francisco is one area which has been well mapped for oneways in OpenStreetMap. This overpass query can be used to extract oneways from OpenStreetMap data.

type=restriction is added to a relation in OpenStreetMap which is used to describe turn restrictions at junctions. The relation has a set of tags that describes the type of restriction, for example. no_left_turn, no_right_turn, no_u_turn, etc. These are traffic signs at junctions and this information must be present on the map to find the best route by the routing engine while planning a route.

Turn restriction denoting no left turn along with conditions: opening and closing times 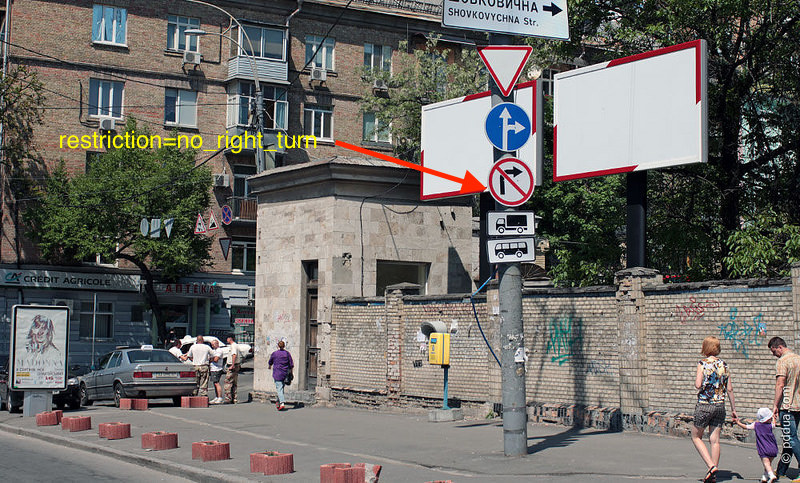 turn restriction which denotes no right turn at the junction

San Francisco in OpenStreetMap has an excellent coverage of turn by turn restrictions at junctions. This overpass query can be used to extract current turn restriction in a bounding box.

The maxspeed=* tag defines the maximum legal speed limit for general traffic on a particular road, railway or waterway. The max speed values will be interpreted as kilometers per hour by default. The maxspeed=* is an important part of routing as it is used in determining the shortest time taken by a specific route to reach a destination. In the case of two routes, the one with the shortest time (higher maxspeed) and shortest distance will be considered as the optimum route.

The maxspeed=* data on OpenStreetMap (for example, in London) in an area can be extracted by this overpass query. 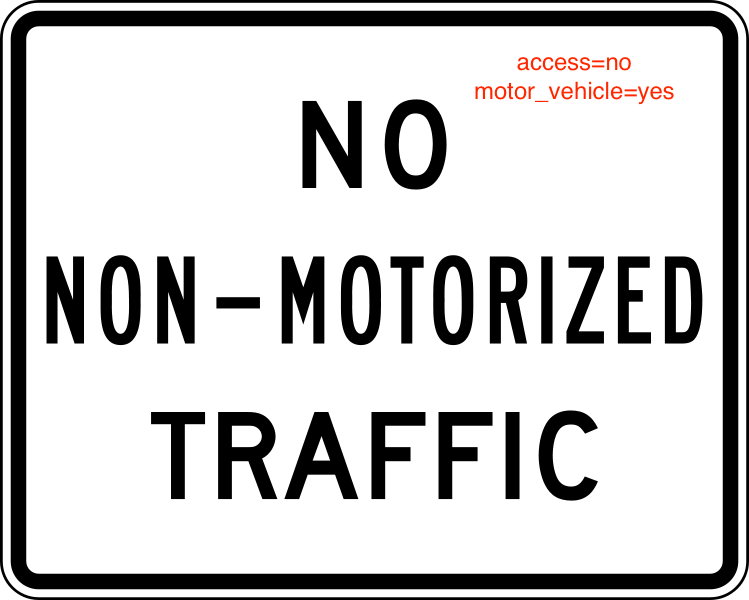 An access=no for non-motorized traffic, ends up altering the route for bicycle profiles, source: US MUTDC

All the access=private tags on OpenStreetMap ways, which will not allow that segment of the way to be used in a route can be extracted from this overpass query. An example of well-mapped access restrictions in OpenStreetMap can be found in London.

Traffic signals such as: highway=traffic_signals, highway=stop or barrier=toll_booth as well as traffic_calming=* are considered during routing. The type=restriction more commonly referred to as turn restrictions are traffic signage which prohibits certain turns in intersections are also a crucial part of a great routing engine.

More details on mapping traffic signals for cars and pedestrians can be found in the OpenStreetMap wiki. 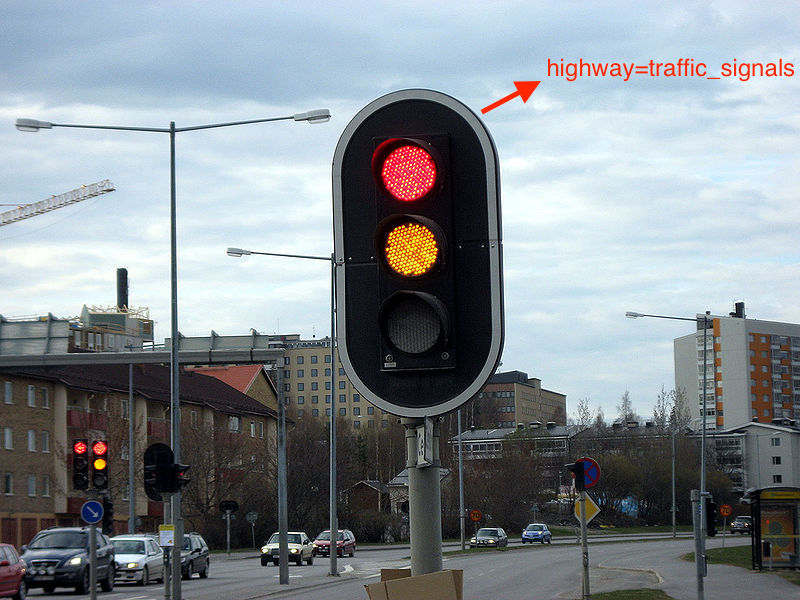 Traffic signal in a junction 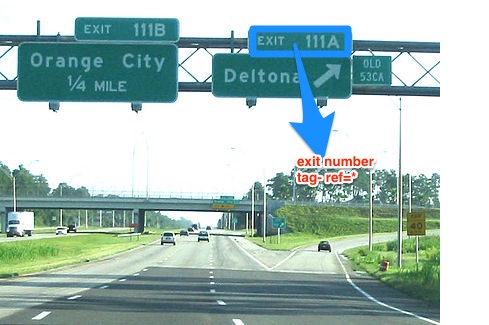 What are destination tags?

The detailed guide on adding exit and destination numbers can be followed for adding exit/destinations. This guide is specifically focused on North America (US/Canada) for now.

As discussed in Modeling Roads for navigation page, there are two types of roads: unidirectional and bidirectional. lanes=* tag is used to count the number of lanes in both these type of roads.

To set number of lanes for roads which carry traffic in both directions use :backward and :forward suffixes

In the image below, the number of lanes is two - lanes=2. Orange line is the center line of bidirectional way which is the main way direction. When the extra lane starts in a bidirectional way, that segment is tagged as lanes=3+lanes:forward=2+lanes:backward=1. Optionally, we specify placement of the lanes relative to the way.

The below image have two tagging variants: 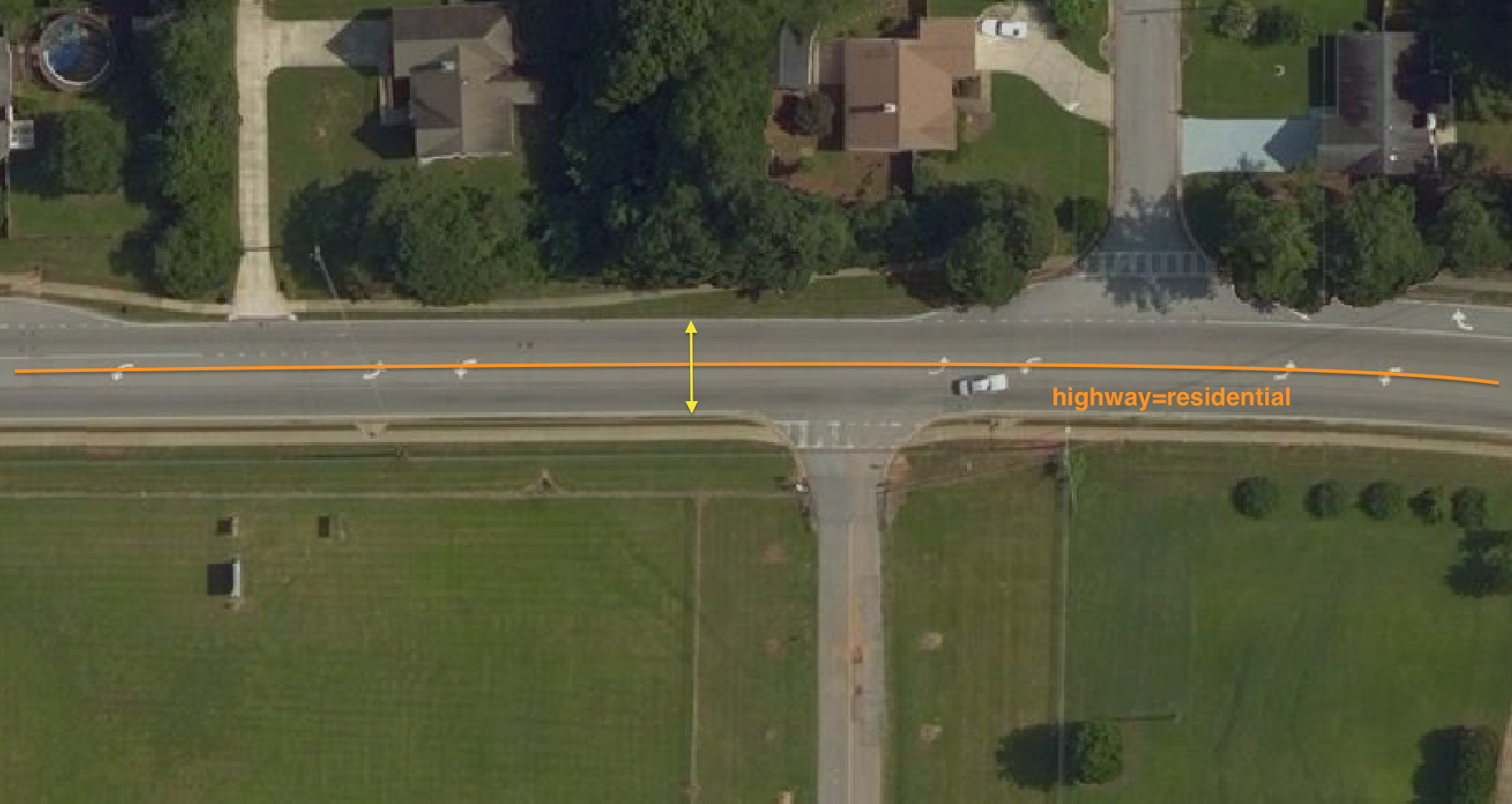 IN case the number of lanes is even but numbers of lanes for each direction not equal. :point_down:

Turn lanes have an influence on the path finding and are one of the most vital components for proper guidance. Choosing the correct turn lane can have a big influence in navigation. Oftentimes, they only help to illustrate a turn better but other times, they are vitally important. In guidance, the aim is to provide a set of instructions, like keep right or keep left by describing the optimum route found by the routing algorithm to a driver. 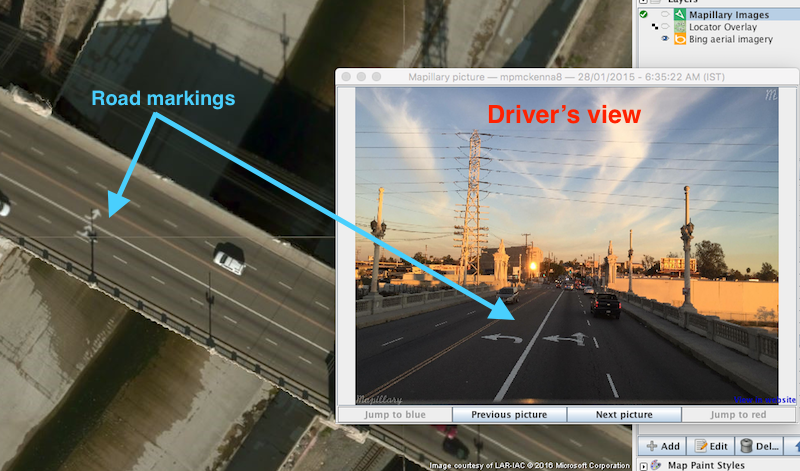 There are three turn lanes tags in OpenStreetMap:

Turn lanes can be mapped from high-resolution satellite imagery sources and street level photos. An example of the high density turn lane area in OpenStreetMap is Los Angeles. This overpass query can be used to extract turn lanes data from OpenStreetMap

The other important attributes in besides turn:lanes and exit/destination data required to provide the better guidance using OpenStreetMap data are:

Information for lanes, highway names, highway ref and relation:route can be found in their respective OpenStreetMap wikis.